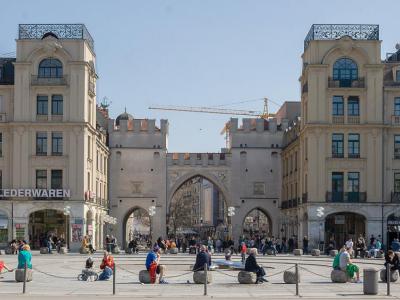 Karlsplatz, situated near the 14th century Karlstor gate, is the second largest square in Munich, after Marienplatz, and is popularly known as Stachus.

The square was laid upon the instructions from the Elector Karl Theodor in 1791. Reportedly, its popular nick “Stachus” derives from a pub, called Beim Stachus, owned by Mathias Eustachius Föderl, that used to be here before the square was built. Another theory suggests that its name is a corruption of the word “Stachel” which means the arrows of marksmen who practiced their skills in the area. As for the Karlstor, this Gothic-style gate was once part of a large fortification. The Rondell buildings on both sides of the gate were designed by renowned architect, Gabriel von Seidl.

The main pedestrian shopping area of Munich lies between Karlplatz and Marienplatz. Among other things adorning Stachus today is a modern fountain, built in the 1970s, with seats for shoppers and visitors to rest their feet in the summer. In the winter, the area surrounding the fountain becomes an ice skating rink. Kaufhof, the very first department store established after WWII, is found on the west side of the square. Underground there is another large shopping center and Stachus Square itself serves as the major hub for Munich’s tramway system.
Image by Diego Delso on Wikimedia under Creative Commons License.
Sight description based on wikipedia