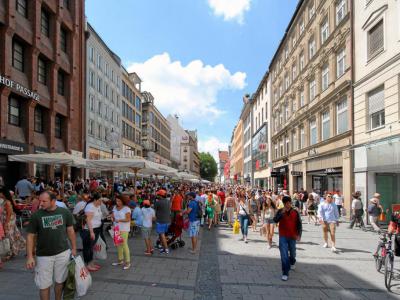 Bordering Marienplatz on the west is one of the oldest streets in Munich, the Kaufingerstraße. Its name is also considered to be the oldest street name in the city, and was probably taken after the patrician Chunradius Choufringer who owned a stately house in the area which was historically mentioned for the first time in a document dated 28 May 1239.

Kaufingerstraße is part of the large west-east axis of Munich's Old Town. At some point, it transforms into Neuhauser Straße, thus forming one huge thoroughfare. The latter is the first and the largest pedestrian zone in the historic part of Munich, and was established in 1972. It also is the top-selling shopping street in entire Germany.

The Neuhauser Straße itself has been in existence since at least 1293 (first documentary mention) and, from 1815 to 1828, was known as Karlstraße, and then renamed Neuhausergasse. The street was rebuilt in 1972 from a main traffic connection with two tram-rails into a pedestrian zone; the reason for that was the 1972 Summer Olympic Games expected to bring a huge influx of additional traffic. The name “Neuhauser” derives from the former village and today's Neuhausen district, where the road leads out of town.

During the Second World War, the fabric of Kaufingerstraße was largely destroyed. During the 1990s and the following years, all the 1950s' and 1960s' constructions were replaced with postmodern architecture.

Today, the Kaufingerstraße/Neuhauser Straße is home to many shops and restaurants. Top international retailers, such as Zara, H&M, C&A, Mango, Karstadt, Kaufhof, Zero and others, have set up their presence here to keep company for the numerous streetside vendors who sell flowers, fruits, vegetables, roasted nuts, and souvenirs. Also adding to the area's appeal are the multiple outdoor cafes offering comfortable respite from a shopping spree with a chance to sit, drink or have a bite, or just to watch people or admire the surrounding architectural splendor.

Tip:
If you're in the city center but want to shop away from the mainstream stores, consider Sendlinger Straße as a good alternative.
Image by M(e)ister Eiskalt on Wikimedia under Creative Commons License.
Sight description based on wikipedia