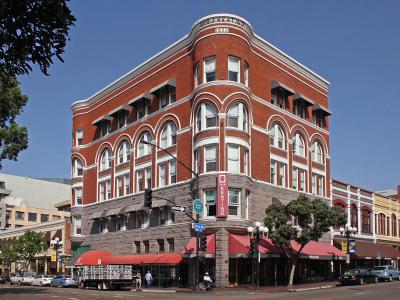 In its over 100-year history of existence, the Keating Building was, at one time, a bank, but now, as the first hotel venture of Pininfarina, the master designer behind Ferrari and Maserati, it boasts 35 loft-style guest rooms and a nightclub/lounge downstairs (SWAY), which still has the original steel vault used by the former bank – a fun historical perk.

The five-story structure was built by Fannie Keating as a tribute to her late husband, George – one of the principle owners of Smith and Keating, the famous 19th-century farm equipment supply company. A classic example of Romanesque Revival style, it had all the modern amenities for the time, such as spacious floor plans, steam heat, and a wire cage elevator (the first, and still longest running, elevator in San Diego), making it one of the most prestigious and sought after office spaces.
Image Courtesy of Wikimedia and Bernard Gagnon.