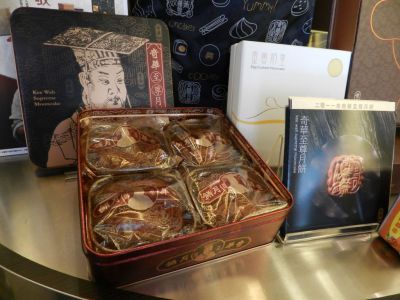 What to buy here: Mooncakes.

Mooncakes are seasonal treats served during the Mid-autumn Festival in the fall. Highly calorific due to its lard and sugar content, mooncakes are meant to be shared with family and friends, as is the tradition for this holiday. Mooncakes are round and rectangular pastries with a thick filling, typically made from lotus seed paste and surrounded by a relatively thin crust imprinted with the Chinese characters for longevity or harmony, bordered by the shop insignia or a Mid-autumn motif. Traditional mooncakes contain yolks from salted duck eggs. Many bakeries in Hong Kong create their own house mooncakes to varying tastiness and popularity. One of the most famous bakeries for mooncakes as well as other traditional Hong Kong baked items is Kee Wah. Kee Wah is a family-operated bakery that has expanded to national proportions since its inception over 70 years ago. It specialises in traditional Hong Kong pastries, such as mooncakes, bridal cakes, egg rolls and more. Kee Wah is the all-in-one shop for a taste of old Hong Kong snacks and is the go-to store for mooncakes and bridal cakes. A tin of 4 Kee Wah mooncakes retails for HK$228.

Kee Wah has expanded from its beginnings as a small neighbourhood grocery store on Shanghai Street in Yau Ma Tei. With 48 locations throughout Hong Kong, Kee Wah has expanded its operations to make it easier for tourists and locals to purchase a taste of old Hong Kong.
Image by Jessica Ng under Creative Commons License.