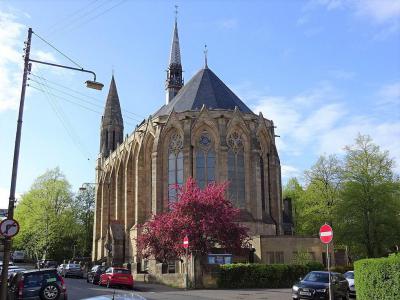 When you start your tour of Glasgow’s lovely churches, you should begin with the Kelvinside and Hillhead Parish Church on Observatory Road.

This beautiful church, built in 1876 by James Sellar, is closely modelled on the Sainte Chapelle in Paris, France. It replaced a temporary church that had a corrugated iron roof and had been built to house the growing population of the Kelvinside and Hillhead area.

The church is renowned for its magnificent stained glass windows. The three central windows were made by Sir Edward Burne-Jones in 1893; the other four, two on each side, are the work of Collier and Company in 1903. Those you will see in the Baptistery and on each side of the Porch were installed in 1928 and were made by Margaret Webster.

The church was renovated in 1930 and repainted, but subsequent water damage revealed a part of the original 19th century stencilled wall. As it was impossible to remove the layers of paint without damaging the red, gold and black ashlar pattern, a specialist was commissioned in 1999 to create a frieze, using the same type of paints and stencils that were used in the original work.
Image by dseang on Flickr under Creative Commons License.

Glasgow is a fantastic city to visit with your family, because there's a whole range of great attractions for everybody - young and old - to enjoy. Take our Family Fun Tour to catch the must-see family attractions in the city.

Glasgow is the largest city in Scotland and a very popular destination among tourists. With a number of 19th century buildings, numerous musical events, football matches, traditional pubs, food venues, Glasgow is a truly unique place. Don't miss the chance to visit some of its most popular tourist attractions listed below.