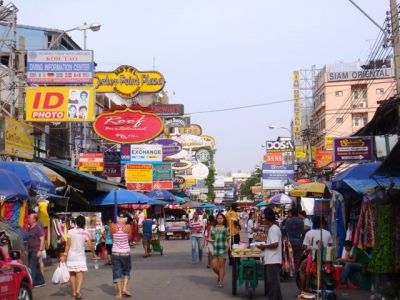 Described as "the place to disappear" or "a short road that has the longest dream in the world", Khaosan (or Khao San) Road is indeed short – only 410 meters long. It was constructed in 1892 under the reign of Rama V. The word "Khaosan" translates as "milled rice", a reminder about the old days when this area in central Bangkok was a major rice market. Over the last 40 years, however, Khaosan Road has evolved into a world-famous "backpacker ghetto" offering cheap accommodation, ranging from "mattress in a box" kind of lodgings to reasonably priced 3-star hotels. According to the Khao San Business Association, the road sees 40,000-50,000 tourists per day during the high season, and some 20,000 per day during the low.

In this small area one can observe the interactions and groupings of disparate characters such as uneducated young Westerners on extended leave from affluent society, high school graduates on gap year travels, Israelis fresh out of military service, university students on holiday or sabbatical leave, young Japanese in rite-of-passage attire, ordinary holidaymakers, (ex-) volunteers from various organizations, and the like.

Khaosan shops sell handicrafts, paintings, clothes, local fruits, unlicensed CDs, DVDs, a wide range of fake IDs, used books, and other useful backpacker items. After dark, bars open, music is played, food hawkers sell barbecued insects and other exotic snacks for tourists, and touts promote ping pong shows. The area is internationally known as a center of dancing, partying, and just prior to the traditional Thai New Year (Songkran festival) of 13–15 April, water splashing that usually turns into a huge water fight.
A Buddhist temple under royal patronage, the centuries-old Wat Chana Songkram, is directly opposite Khaosan Road to the west, while the area to the northwest contains an Islamic community and several small mosques.
Image by (WT-shared) Shoestring at wts wikivoyage on Wikimedia under Creative Commons License.
Sight description based on wikipedia