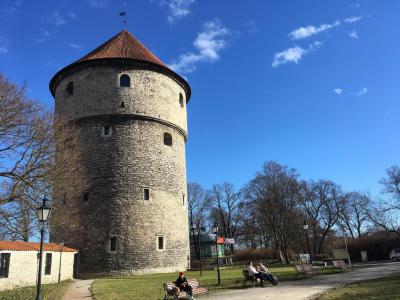 The phrase “Kiek in de Kok” derives from German, meaning "Peep into the Kitchen". Kiek in de Kök was an old artillery tower. Occupants of the tower used to be able to peek down into the kitchens of nearby homes, hence the name.

The tower was built in 1475 as part of the impressive fortifications that used to surround the town. It stands an impressive 38 meters high, and is made with walls that are 4 meters thick, which were designed to stand up against canon fire. Today you can still see old cannon balls that are embedded into the walls of the tower that date all the way back to the 16th century.

The old tower has been modified many times during its lifetime. In the 17th Century new gun holes were made at the top of the tower. The structure fell out of use by 1760. For a while, it became a repository for archives and was used briefly as apartments.

Today, the tower is a museum for the town’s fortification system with displays showing how the city's system of walls and towers developed through the centuries as well as other facets of life in old Tallinn. From the museum, one can also enter the Bastion tunnels, dating back to the 17th to 18th centuries, are an integral part of the city’s defense system.
Image by Eric Fischer on Wikimedia under Creative Commons License.