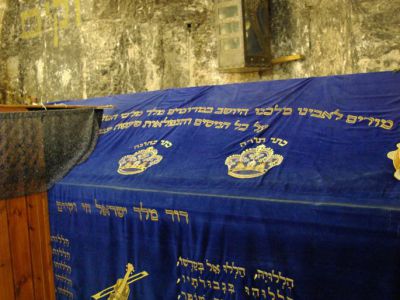 King David is an essential part of Jewish identity; at his tomb, one realizes that, in a way, he is still alive. This site is considered by some to be his burial place, according to a tradition that began in the 12th century AD, shortly after the Crusades. Now in Jewish control, the building is from the times of the Crusaders, and parts of it are free for public visitation.

As you walk in, take a look at the beautiful tile work in the first antechamber, with the patchwork done to match the repairs to the Dome of the Rock during the 1500s. The second antechamber houses a mihrab with equally impressive tile work dating from the 1400s when the area was under Muslim control. The building is currently used as a synagogue and when going in through separate entrances for men and women, you will see the velvet-draped cenotaph that marks the place of David's tomb. Pictures are usually allowed, but try not to upset the people praying there.

The tomb compound includes the location traditionally identified as the Cenacle of Jesus (where, according to tradition, Christ washed his Disciples' feet after the Last Supper) – the original meeting place of the Christian faith, while on the roof of the building there is an impressive observation point, and a mosque's minaret, built by the Turks during the 16th century following the Christians' expulsion from Mount Zion.

Tip:
Be sure to be appropriately covered; modest dress is advised regardless of gender (kippahs are provided for men).
Image by Berthold Werner on Wikimedia under Creative Commons License.