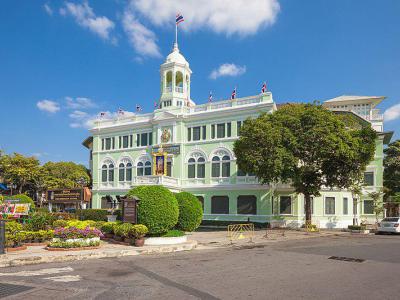 King Prajadhipok Museum presents the life and history of the King Prajadhipok’s reign. The museum has nine permanent exhibition halls covering various subjects. King Prajadhipok’s personal effects are displayed including items on films, music, sports and writings that reveal his personal tastes. The exhibition shows his life before he was crowned, his life after abdication and his final years in England. On display are photos of the coronation ceremony, the celebrations of Bangkok's 150th anniversary and the revolution.

Prajadhipok was not destined to be king and planned to serve in the military. However, when King Rama VI died without heirs, he became Rama VII. King Prajadhipok rule marked the end of the absolute monarchy and changed it into constitutional monarchy.

The neoclassic building of the museum was built in 1906 towards the end of King Rama V's reign. Designed by a Western architect, the three-storey concrete edifice is decorated with Greco-Roman motifs and reliefs with a dome-shaped tower topping its front hall.

M. Charles Beguelin, a French-Swiss architect, designed the museum building. Concrete is mostly used for its construction. In 1995, the building was recognized as a national heritage site by the Fine Arts Department. Conservation and renovation project was completed in 1999 and the building was converted into Museum in 2001. The museum has three floors. Temporary exhibits, the museum shop and café are on the ground floor and permanent exhibits are on the second and third floors.

The museum building was completed in 1908 after six years of construction work. It originally housed the John Sampson Store which sold Western high fashions and tailor made suits. But the building changed hands and sold construction materials bearing the name the Suthadilok Store. In 1933, the Public Works Department acquired the building and started using it as its headquarters. In 2001, King Prajadhipok Institute received the sanction of the Public Works Department for use of the building as the museum.

Do not forget to visit this museum as it is an enlightening source of information on Thailand during the significant period of King Prajadhipok. The museum is open Tuesday to Sunday from 9:00 am to 4:00 pm
Image by Supanut Arunoprayote on Wikimedia under Creative Commons License.