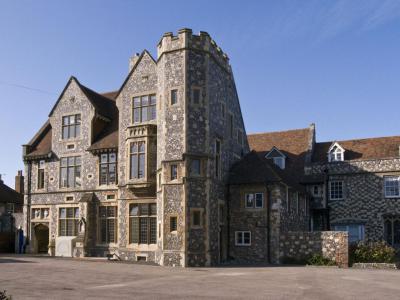 The King's School is a British co-educational independent school for both day and boarding pupils in the historic English cathedral city of Canterbury in Kent. It is a member of the Headmasters' and Headmistresses' Conference and the Eton Group.

The school originated as a medieval cathedral school, and it is often claimed to have been founded in AD 597 by St. Augustine, therefore making it the world's oldest extant school. This is based on the fact that St. Augustine founded an abbey (within the current school's grounds) where it is known that teaching took place. When the dissolution of the monasteries occurred in the reign of Henry VIII, the school was refounded as The King's School, Canterbury.
Image Courtesy of Wikimedia and Oosoom.
Sight description based on Wikipedia.