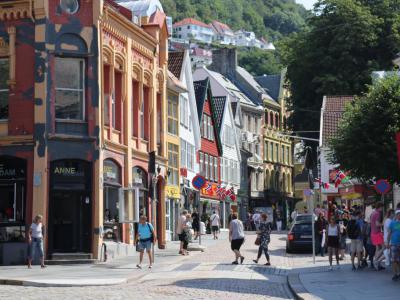 Named in honor of Oscar I, King of Norway and Sweden, in 1857. Prior to that date this street had a host of other names. It has been "shoemaker street", "tailor street", "hospital street", "St. Jacobs street", "Potrgaden", and "Domkirkegaden."

The street is narrower than most others in Bergen. At the south-eastern end is the old city gate of Bergen. A number of significant buildings line the street. At No. 67 King Oscars Street is Zander Kaae's Foundation, built in the 18th century for a charity and now it rents rooms to students.

St. Jorgen's Hospital was an 18th century leprosy hospital and now it is a leprosy museum. This is a sign that leprosy is down, an improvement, count your blessings. Next to the museum is Danekert Krohn's Foundation, another 18th century charity, this one for the elderly.

The street has its share of schools. There is Bergen katedralskole (cathedral school), one of three secondary schools on King Oscar Street. There are also Danielsen videregaende skole, and Tanks videregaende skole.

A visit to King Oscars Street reveals a side of Bergen, hidden from ordinary sight. It is like a secret place, away from the chain shops and popular hang-outs. There are plenty shops and restaurants but they all have a personal style and charm that comes with the street.
Image by Linguaddict on Wikimedia under Creative Commons License.