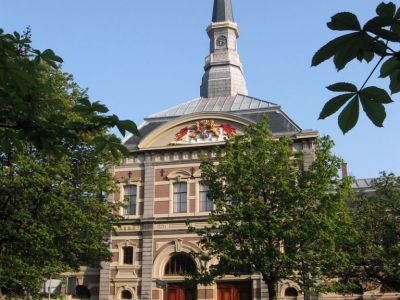 The Koninklijke Stallen (English: Royal Stables) is a multifaceted building, adjacent to the Noordeinde Palace and the Paleis Tuin (Palace Garden).

The eclectic, Renaissance-style, four-wing complex, enclosing a rectangular, fully paved courtyard, was designed by the Dutch architect Hugo Pieter Vogel. It was completed within the period of 1876-1879 and was built on the site for which part of the Palace Garden was sacrificed. The front of the building was slightly set back from the main road, so as to provide room for making a turn by entering and exiting carriages.

The central part of the façade is surmounted by a semicircular pediment adorned with the coat of arms of the Kingdom of the Netherlands, above which is a raised roof, culminating in a needle spire. The corner pavilions are also crowned with round pediments, each carrying a horse head medallion.

The facility houses horses as well as carriages of the royal family, including (since 1898) the Golden Coach. Also kept here are the court cars and the Irish half-breed Wexy (1802-1840), the stuffed horse of the then future King William II, which was wounded by a gunshot during the Battle of Waterloo in 1815.

At the start of the German invasion of the Netherlands in May 1940, there were 52 horses in the stables. In the summer of that year, 34 horses were sold before the German occupying forces could confiscate them. During the war years, the proceeds were used to buy food for the remaining horses and pay for the stables maintenance.

As the property of the Royal Stable Department, the building is normally not open to the public. Since 2016, however, this national monument can be visited, during summer, for a period of several weeks.
Image by Michiel1972 on Wikimedia under Creative Commons License.
Sight description based on wikipedia