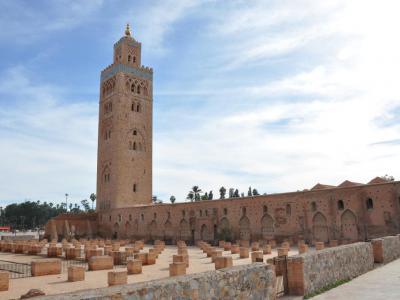 The Koutoubia mosque and minaret, located 200 m west of Jemaa el-Fnaa on Avenue Mohammed V, make a good orientation landmark in case you get lost in the medina's labyrinth. The name is derived from the Arabic "al-Koutoubiyyin" which translates as "bookseller", since the area was once dense with sellers of books and manuscripts. The largest mosque in Marrakech, the Koutoubia is closed to non-Muslims, but everyone can enjoy the adjacent park with trees (palms, orange, olives), flower beds, fountains and benches at all times – completely free of charge.

A smaller predecessor mosque was built on this site in 1147 by the Almohad dynasty after they had defeated the Almoravides and taken over Marrakech. Unfortunately, its qiblah wall, the one supposed to be facing Mecca, was badly orientated, so instead of simply adjusting its position, the Almohades built a new, larger mosque nearby while the old one fell into neglect. The current mosque is built from a reddish-brown sandstone and is decorated with curved window arches and pointed "merlons" or crenellations.

The square minaret stands 69 m high by 13 m wide, with six rooms set on top of one another, and is crowned with a ceramic strip, small tower and four guilded copper balls decreasing in size. The north-western side of the minaret contains ruins and the cisterns from an Almoravid palace which stood on this site before the Almohades took over.

Why You Should Visit:
One of Morocco's biggest mosques – not to be missed!

Tip:
Equally beautiful, day or night, the building reveals different “personalities”, depending on the time of day. It is probably wise to avoid Fridays until after 3pm-ish, when the place is not so busy with worshipers.
Make sure to walk around the entire mosque, as there are picturesque views all around it. Don't miss the gardens behind – a perfect place for a good glass of mint tea and watching the world go by.
Image Courtesy of Flickr and Jorge Láscar.