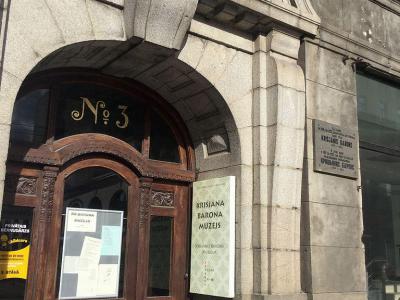 Krisjanis Barons (1835-1923) was a well-known Latvian folklorist, who pioneered collecting and publishing dainas, - traditional four-verse folk poems, - and whose image is currently featured on a 100 Latu (local currency) note. In the course of his life, Barons had gathered over one million dainas, travelling from house to house across the nation. Each poem he had found was written on a piece of paper and then placed in a separate drawer. Afterwards, the poems were published in voluminous editions in an attempt to popularize them nationwide and, thus, pass on to the future generations.

The museum is located on eponymous Barona iela (Barons street) in Riga, in the apartment previously occupied by Barons himself. The premise conveys the turn of the century atmosphere courtesy of the original furniture, old photographs, manuscripts and household items carefully preserved and displayed in the museum, virtually transporting visitors back to the 1920s. Captured on the pictures, hanging on the walls, are friends, family and places associated with Barons. Exhibit descriptions are available in Latvian and English.