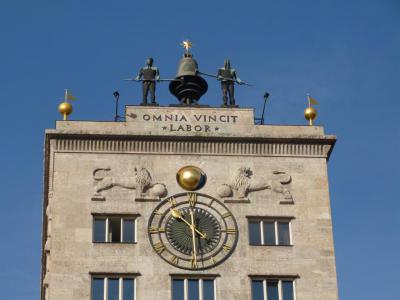 The Kroch high-rise in Leipzig was built in 1927/1928 for the private bank Kroch jr. KGaA and was the city's first skyscraper. The reinforced concrete building, designed as a clock tower and 43 m high, is located on the west side of Augustusplatz.

The Krochhaus, which opened on August 1, 1928, was built in place of the dilapidated front building of the Theaterpassage from 1872, which was owned by Leipzig University. In 1926, the architect German Bestelmeyer was able to take one of the two second places in the competition organized by Bankhaus Kroch together with the Leipzig City Council. Out of the 69 proposals received, it was not possible to agree on a first place, so that the decision was finally made to go for Bestelmeyer’s design “Orion”, a limestone-clad, twelve-storey office tower based on the clock tower (Torre dell’orologio) in Venice.

The height of the new "tower house", whose ridge height was based on the gable of the Pauline Church, was very controversial at the time. Therefore, only a provisional building permit was granted for 10 floors up to 35.50 m. However, since a height of 43 m was planned, which Bestelmeyer had reduced to 39.50 m as a compromise, the upper four floors were initially only allowed to be set up as dummies in order to be able to test the urban planning effect of the Kroch high-rise before the final completion. This building template not only strengthened Bestelmeyer in his view that 12 floors with 43.20 m was the ideal height, but also the Leipzig Council, so that the final approval was finally granted on December 16, 1927.
Image Courtesy of Wikimedia and Xxlfussel.
Sight description based on Wikipedia.