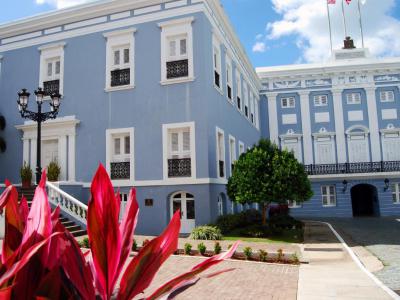 La Fortaleza, or the Fortress, is the current official residence of the Governor of Puerto Rico. It was built between 1533 and 1540 to defend the harbor of San Juan. It is the oldest executive mansion in the New World. It was listed by UNESCO in 1983 as a World Heritage Site. During the 1640 reconstruction, the chapel of Santa Catalina, then located outside the walls, was demolished and was integrated into it, which gave rise to another name for which it is known, Palacio de Santa Catalina.

La Fortaleza was the first defensive fortification built for the city of San Juan, and the first of a series of military structures built to protect the city which included the Fort San Felipe del Morro and the Fort San Cristóbal. The fortress underwent a massive reconstruction in 1846 to change its military appearance into a palatial facade. La Fortaleza has been the residence of more than 170 governors of Puerto Rico and has hosted various dignitaries, including President John F. Kennedy and his wife Jacqueline Kennedy who stayed in La Fortaleza in 1961. The construction was authorized by Charles V, Holy Roman Emperor as a defense against attacks from Carib Indians and the European powers of the time. At present, the complex consists of a few attached buildings with formal living quarters in the second floor, and private quarters in the third. It overlooks the high city walls that front the bay, and within the north perimeter of the house are sheltered gardens and a swimming pool.
Image by NeitherFanboy on Wikimedia under Creative Commons License.
Sight description based on wikipedia

San Juan proudly features the country’s oldest quarters and historic buildings. In addition to containing the oldest occupied residence in the Western Hemisphere, visitors can also admire the old City Hall, the Cristo Chapel, Convento de los Dominicos, historic El Arsenal and many other fascinating attractions. Take the following tour to see the most popular and famous historic buildings in San...  view more