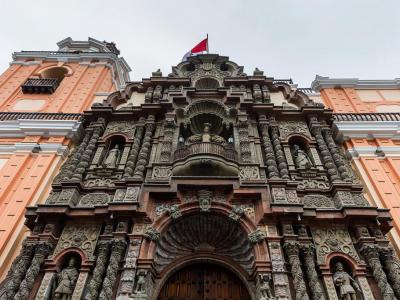 Iglesia La Merced is an 18th-century church in Lima, built in the so-called Churrigueresco style. The first church on this site was built in 1534 and housed the very first mass ever served in the city. The history of this place is the history of destruction and reconstruction. The original La Merced temple eventually proved too small for a growing community and had to be pulled down. The new, bigger church was built in its place in 1628. The year 1687 brought an earthquake in which it was destroyed and had to be rebuilt anew. About half a century later, in 1746, another, bigger earthquake damaged the church again and then in 1773, it was ravaged by fire. The current La Merced was completed in the late 1700s and has been noted since for its ornate Baroque and Colonial facade.

Tourists are awestruck by the beautiful architecture of the building. In addition to its intricate design, the church is grand with artwork, of which the most notable piece is the great altar honoring Virgin Mercedes, patron of the Peruvian armed forces. You can also see a huge collection of stunning paintings and colonial statues. Regardless of whether you're a history buff, an art lover or a passionate churchgoer, you will find a visit to this place well worth your while.

Why You Should Visit:
From the façade to the interior, every inch of this church is a work or art. All the altars try to out-do each other by their ornamentations and intricacies; each is different.

Tip:
If the front door isn't open, go by the side door past the garden and to the underground.
This is an active church, so make sure you avoid mass times if you want to take photos.