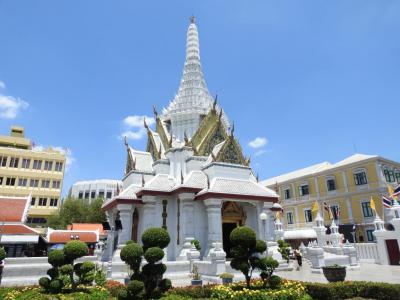 Lak Mueang are the so-called city pillars that are present in most cities throughout Thailand. Usually, they are placed in a shrine that accommodates the city spirit deity, Chao Pho Lak Mueang. This ancient tradition is rooted in a Brahman custom involving the Held ceremony (Held “Lak Muang”), whereby a single pillar made of acacia wood, called Chaiyaphreuk (which literally means the "tree of victory"), was erected, as a spiritual center – “soul” – of the city, before its proper construction began. The pillar was then venerated by citizens who sought prosperity and success, as well as to avoid misfortune.

King Rama I installed the city pillar here, on 21 April 1782, after moving his capital from Thonburi to Bangkok. The shrine was the first building in the new capital, constructed even ahead of the royal palace. Bangkok's pillar shrine (known locally as San Lak Muang) is one of the most ancient, sacred, and magnificent shrines of this sort in Thailand.

According to the In–Chan–Mun–Kong legend, the construction required a sacrifice of four people following the proclamation of the words "in–chan–mun–kong" ("in" to the north, "chan" to the south, "mun" to the east, and "kong" to the west) around the city. Anyone who responded was captured, brought to the ceremonial location, and buried in a hole. Their spirits were believed to be guarding the city. No documented evidence, however, supports this myth.

People usually use three incense sticks, one candle, gold foil, two lotuses, two flower garlands, and one three-colour taffeta to worship at this shrine.
Image Courtesy of Wikimedia and PEAK99.
Sight description based on Wikipedia.