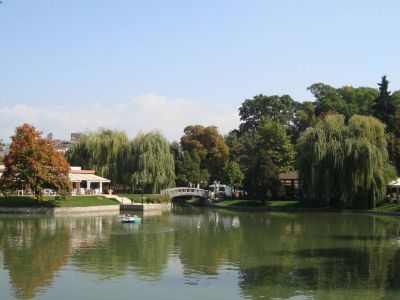 Ariana (Bulgarian: Ариана) is the name of a medium-sized artificial lake in Knyaz Boris's Garden in Sofia. It is "B"-shaped, 175 m long and 75 m wide, with a small island at its narrowest point. It is located at the northern most corner of the park, in the city centre, between the Eagles' Bridge and the national stadium.

The lake was constructed in the late 19th Century and has since been a focal point for leisurly walks by Sofianites. Water wheels and rowing boats have been a feature, and in winter it was frequently known to freeze over and for people to ice-skate on its surface. In the mid-20th century, a casino was built on the island. In the early 1990s, the municipal government ceased caring for the lake, which dried up and remained empty and disused for nearly two decades. In 2007, the lake and its vicinity were renovated and once more began to be a place of leisure.
Image by Aryadne on Wikimedia under Creative Commons License.
Sight description based on wikipedia