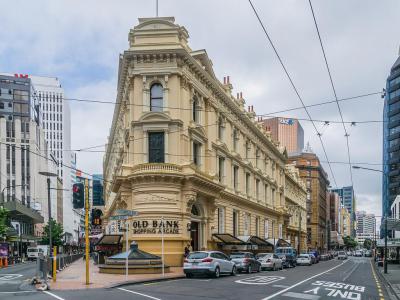 Lambton Quay was the site of the original European settlement in New Zealand in 1840. It was once known as The Beach and is the heart of the central business district. Lambton Quay runs north and south from Thorndon Quay to Willis Street. Along with Willis Street and Courtenay Place, Lambton Quay makes up the Golden Mile.

Lambton Quay was once the high-water line of the foreshore. However, the 1855 Wairarapa earthquake caused land uplift that pushed Lambton Quay about 250 meters (approximately 273 yards) away from the shore.

Lambton Quay is one of the most traveled streets in Wellington. It is estimated that about 70,000 people pass through Lambton Quay every day. It is a major commercial and administrative area that is especially interesting to tourists. There are a number of sights worth visiting along Lambton Quay including the Wellington Cenotaph War Memorial, the Cable Car Museum and Funicular, the New Zealand Parliament Buildings and the Old Government Buildings, among others.

The street gets its name from John Lambton, 1st Earl of Durham. Lambton was the first chairman of the New Zealand Company, a company formed in United Kingdom in the first half of the 19th century on a business model focused on the systematic colonization of New Zealand.
Image Courtesy of Wikimedia and Krzysztof Golik.