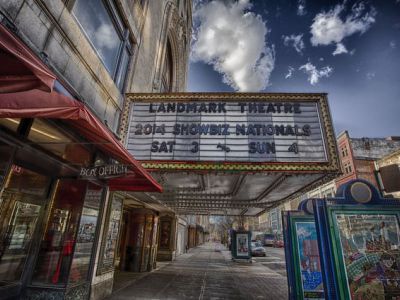 The Landmark Theatre, originally known as Loew's State Theater, is an historic theater from the era of "movie palaces". Designed by Thomas W. Lamb, it is the city's only surviving example of the opulent theatrical venues of the 1920s.

Originally named Loew's State Theatre, it opened on February 18, 1928, and offered double bills of famous vaudeville stage acts and first-run films. During the Great Depression and World War II it continued to do good business, as theater patrons escaped for a few hours into its plush grandeur. However, by the 1970s, the theater suffered from low attendance and was in disrepair. Eventually it closed, and was in danger of demolition. In 1977 a group, Syracuse Area Landmark Theatre, or SALT, was formed to preserve and renovate the venue. Still open today, the Landmark offers concerts and other performances, is available for weddings and other private parties, and continues to sponsor fundraisers to support its activities.
Image by John Hoey on Flickr under Creative Commons License.
Sight description based on wikipedia