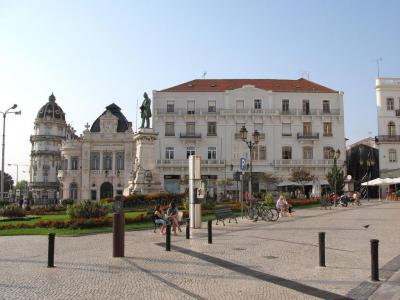 Joaquim Antonio de Aguiar was the "Friar-Killer". As Minister of Justice after the Portuguese civil war in 1834, he stripped all religious orders of their properties and awarded the proceeds to the National Exchequer. For this he earned a statue by sculptor Costa Mota in the Toll Square of Coimbra, the Largo da Portagem.

Largo da Portagem can be translated as an open place to collect tolls. The square is of white marble and stone and landscaped with green areas and flower beds. Joaquim stands on a pedestal in the center of the square. The square borders the River Mondego and the Santa Clara Bridge. Toll collecting was a medieval practice.

Ornate baroque and modern buildings line the square. The two most remarkable edifices are The Bank of Portugal (not in the toll business) and the Astoria Hotel (1926). Both the bank and the hotel are the work of architect Adaes Bermudes, nephew of Costa Mota.

When the weather is fine, cafes and patisseries in the neighborhood have chairs and tables on the street. The square is well lit at night.
Image Courtesy of Wikimedia and ho visto nina volare.