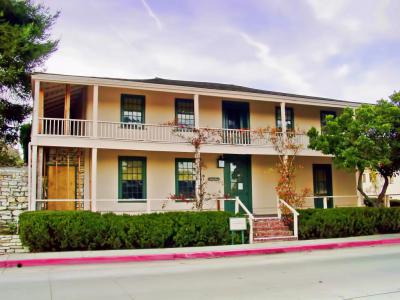 The Larkin House is a historic house built in 1835 by Thomas O. Larkin. It is claimed to be the first two-story house in all of California, with a design combining Spanish Colonial building methods with New England architectural features to create the popular Monterey Colonial style of architecture.

The House is a two-story wood frame structure, with walls of adobe and a low-pitch hip roof. Three of its four sides are covered by a two-story wood-frame flat-roof veranda. The post-and-beam framing is exposed in the interior, where there is also a fireplace and chimney.

In 1832 Thomas O. Larkin, a native of Massachusetts, joined his half-brother John B. R. Cooper in business in California. Larkin became the most influential American in Monterey, then the capital of Alta California. He served as the only United States consul to Mexico in Monterey. Larkin sought to build a house more typical of his native New England, but local sawmills were unable to supply him with sufficient redwood for the purpose. Larkin compromised by building a typical New England frame, but then finished its walls in whitewashed adobe. The framing made it possible to significantly enlarge the window openings over traditional Spanish Colonial architecture, and the style of this house rapidly spread across California.