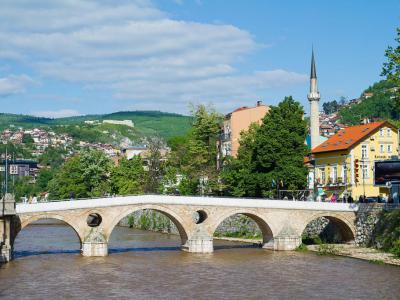 Latin Bridge is a historic Ottoman bridge over the River Miljacka in Sarajevo, Bosnia and Herzegovina. The northern end of the bridge was the site of the assassination of Archduke Franz Ferdinand of Austria by Gavrilo Princip in 1914, which became a casus belli of World War I.

Judging by its foundation, it is the oldest among the preserved bridges in the city. The census of the Sanjak of Bosnia from 1541 mentions the bridge on this spot, built by the leather-worker Hussein, son of Sirmerd. This first bridge seems to have been made of wood, because the court record from 1565 witness that the stone bridge was built here by eminent citizen of Sarajevo Ali-Ajni Beg. Someone worked out that the year when it was rebuilt can be obtained from the numerical values in the word 'Briga' it is 1213 which by Islamic calendar equals the year of the reconstruction 1798/99. The bridge has four arches and rests on three strong pillars and the embankment; it is built of stone and gypsum and the two relieving openings, 'eyes' in the mass above pillars are so characteristic that they can be seen in the seal of Sarajevo. Because of heavy traffic at the time of Austria-Hungary, the pavements on consoles were added to the bridge.
Image Courtesy of Wikimedia and Tumi-1983.
Sight description based on Wikipedia.