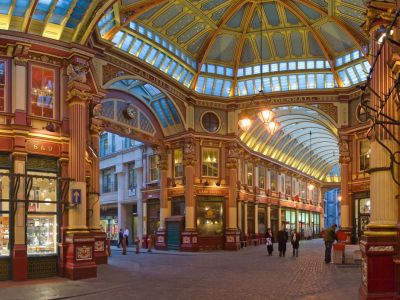 Built in 1881, Leadenhall Market is one of the oldest marketplaces in London where meat and fish had been sold since as far back as the 14th century. Located in the historic center of London’s financial district, this beautiful covered Victorian market is a rather magical place for a bit of shopping. Its ornate painted green and red roof and cobbled floors made Leadenhall a popular attraction even before it played a starring role in the Harry Potter series.

In the films, the market is featured as the area of London which secretly leads magical folk to Diagon Alley, the cobblestoned shopping hub of the wizarding world where Hogwarts students stock up on school supplies like spell books and wands. Harry and Hagrid walk through the market as they approach the Leaky Cauldron, which holds a sneaky entrance to the alley.

In both, “Harry Potter and the Philosopher's Stone” and “Harry Potter and the Goblet of Fire” an empty storefront at 42 Bull’s Head Passage (at Leadenhall Market) was used as the entrance of the Leaky Cauldron. The shop was vacant at the time, so filmmakers were able to paint it black and hang up a Leaky Cauldron sign for the scene. Its rounded blue doorway is now instantly recognizable to Harry Potter fans. Today the shop is occupied by Glass House Opticians, so, with a bit of luck, you may even find Mad-Eye Moody here, getting fitted for a contact lens...
Image Courtesy of Wikimedia and Diliff.