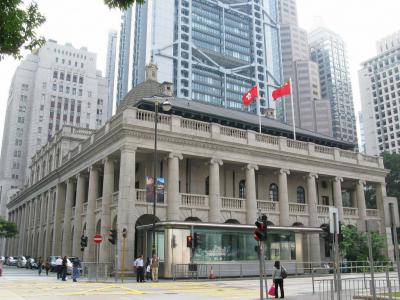 The structure was constructed on reclaimed land, and was opened to public on the 15th of January in the year 1912. Neo-classical architecture was used to design the building, and the 2 storey granite structure is supported by Ionic columns. The building is surmounted by a blind folded statue of Themis, the Greek Goddess of Justice and Law. This statue is identical to the statue erected on the Old Bailey of London.

The building had to undergo restoration in 1978, as it was severely affected by the construction of the Mass Transit Railway. The Legislative Council Building is one of the 92 declared monuments of Hong Kong.
Image by Baycrest on Wikimedia under Creative Commons License.
Sight description based on wikipedia