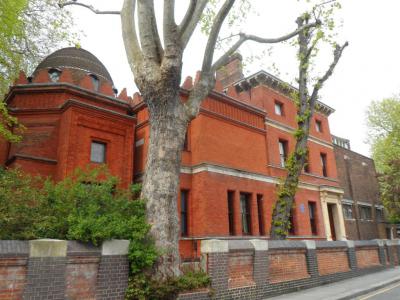 The Leighton House Museum is an art museum in the Holland Park area of the Royal Borough of Kensington and Chelsea in west London.

The building was the London home of painter Frederic Leighton, 1st Baron Leighton (1830–1896), who commissioned the architect and designer George Aitchison to build him a combined home and studio noted for its incorporation of tiles and other elements purchased in the Near East to build a magnificent Qa'a (room). The resulting building, completed 1866–95, on the privately owned Ilchester Estate, is now Grade II listed. It is noted for its elaborate Orientalist and aesthetic interiors.

The museum has been open to the public since 1929. In 1958 the London County Council commemorated Leighton with a blue plaque at the museum. The museum was awarded the European Union Prize for Cultural Heritage / Europa Nostra Award in 2012. It is open daily except Tuesdays, and is a companion museum to Linley Sambourne House at 18 Stafford Terrace, another Victorian artist's home in Kensington.

The house's pseudo-Islamic court has featured as a set in various film and television programs, such as Nicholas Nickleby (2002), Brazil (1985), and an episode of the drama series Spooks, as well as the music video for the songs "Golden Brown" by The Stranglers and "Gold" by Spandau Ballet.

Leighton House Museum is one of the lesser known smaller museums that offers great value to lovers of Victorian art or art nouveau. The house interior and the art work by Lord Leighton are absolutely beautiful to look at.
Image Courtesy of Wikimedia and Spudgun67.
Sight description based on Wikipedia.