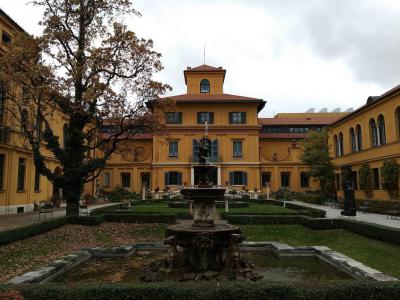 The Lenbachhaus is a Florentine Villa that was once the residence of artist Franz von Lenbach. It houses a gallery displaying contemporary art including works of eminent Munich-based artists.

Franz von Lenbach, a 19th-century artist who was best known for his portraits of famous persons including Otto von Bismarck, employed architect Gabriel von Seidl to build Lenbachhaus. It was constructed between 1887 and 1891. Franz von Lenbach lived and worked in the grand Florentine mansion until his death in 1904. His widow sold the house to the city of Munich in 1924. Architect Hans Grassel designed an additional wing and Lenbachhaus was opened as an art gallery in 1926. In 1972, another wing was added just before the Munich Olympics. The museum is being renovated again and the damage caused during World War II is being repaired.

A variety of contemporary Munich-based and international artists are represented at the Lenbachhaus art gallery. The works on display include paintings by Munich artists of the 19th and 20th centuries. Notable works are from a collection of works of a group of early 20th-century expressionist artists called the Blaue Reiter. The collection was donated in 1957 by Gabriele Munter, one of the best-known members of the group. International works on display include paintings by Andy Warhol and Joseph Beuys. Exhibitions promoting works by new contemporary artists are regularly held at the Kunstbau.

Why You Should Visit:
There are few places in the world where you can see a significant number of Kandinsky, Münter, Macke, Munch and all their friends in such a brilliant setting. And it is a little bit of a hidden gem, making for a thoroughly enjoyable visit.

Tip:
When you are finished, the terrace café/restaurant is great (also as a destination itself).
Be sure to ask for an audio guide, which is included in the cost of the admission.