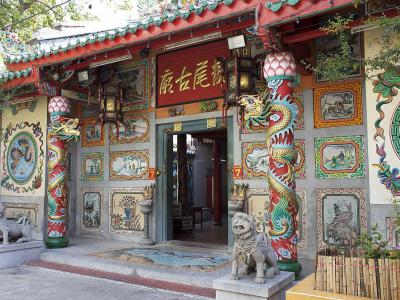 Hidden in the narrow alleys of Bangkok's Chinatown, this Chinese shrine is considered to be the oldest in Thailand, based on a plaque contained inside with an inscription stating that it was built in 1658, during the Ayutthaya period. Thought to have originally been a Teochew-style shrine, it would have been used by Chinese businessmen aiming to improve the prosperity of their businesses and to establish social connections.

Small and very colorful, the shrine has a roof made of glazed tiles, adorned with two ceramic-clad dragons. The central altar is dedicated to Leng Buai Ia and his wife, while to the left and right there are altars to the deity Gong Wu (Guan Yu) and the Queen of Heaven, Tianhou, respectively.

Near the entrance is an ancient bell attributed to the Daoguang Emperor, towards the end of the Qing dynasty. Other items of interest include three plaques from the reign of the Kangxi Emperor in the Qing dynasty, a bell inscribed with the name of Choen Thai Chue, and a container for incense sticks given as a gift from King Chulalongkorn (Rama V).
Image by Alan Oscroft on Wikimedia under Creative Commons License.