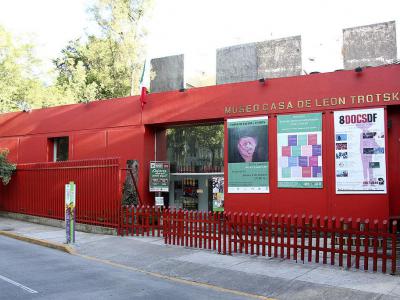 The Leon Trotsky House Museum in Coyoacán honors Leon Trotsky and the organization that promotes political asylum. The core of the complex is the house in which Trotsky lived from 1939 to 1940 together with his wife and teenage grandson while in exile, and where the Russian communist dissident was murdered, on 20 August 1940, by Stalin's NKVD agent, Ramón Mercader.

The entire complex is encompassed by high outer walls with watchtowers, which give it a sort of fortress-like appearance. This measure was necessitated by an earlier, failed attempt on Trotsky's life made on 24 May 1940 by a group of NKVD agents assisted by Mexican painter David Alfaro Siqueiros.

The house, and especially the study in which Mercader killed Trotsky with an ice axe blow to his head, is kept exactly as it was at that moment, including the papers and the books in their exact positions. Other rooms within the museum display photographs, newspapers, and personal effects of Trotsky, including his trademark small round glasses. The guards’ house contains a permanent photographic collection featuring images of Trotsky's family and his participation in the Russian Bolshevik Revolution of 1917. There are also temporary exhibit halls that host showings by various artists each month.

The outside garden is maintained with tropical flowers and other plants, such as rare cacti, which Trotsky collected. In the center of the garden is the tomb of Trotsky and his wife marked by a stone stele and a flagpole with the Soviet flag. The complex was turned into a museum and asylum institution in 1990, marking the 50th anniversary of Trotsky's assassination.
Image Courtesy of Wikimedia and Tonatiuh101.
Sight description based on Wikipedia.