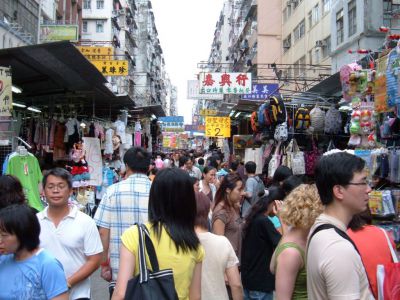 At the end of the 18th century, large-scale reclamation projects were carried out in an attempt to increase land supply for further development in the downtown area. After the complete of the projects, large pieces of newly reclaimed land were available for sale. It was during this period that Kim Li Yuen, a rich businessman from China's Guangdong Province, bought part of the newly reclaimed land for property development. Li Yuen Street East named after Kim Li Yuen was formally founded in 1894.

During that time, houses on the two sides of the streets were a hybrid of residential units and commercial outlets with the ground floor as shops and the upper floors as apartments. Street stalls that abound nowadays had not yet emerged.

The newspaper offices did not last long on Li Yuen East Street. Gradually, they relocated to other places. It was during that time street stalls selling clothes succeeded the previous newspaper offices as the familiar scene of the street. As the number of foreign tourists increased, the street stalls diversified the goods they sold. As a result, a wide variety of goods can now be found on the street including clothes, drapery, accessories, and souvenirs.
Image by BrokenSphere on Wikimedia under Creative Commons License.
Sight description based on wikipedia