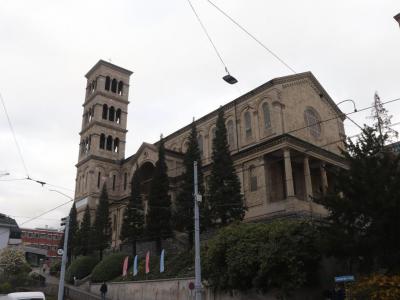 The Liebfrauenkirche translates to Church of Our Dear Lady, and is a common name for churches throughout German-speaking countries. A church on this site dates back to the Middle Ages; at which time it stood outside the Zurich city walls. Zurich was fortified with walls from the 13th to the 17th century, so it is often noted if older buildings were inside or outside of the walls. The current church on this site was built in 1893. The Liebfrauen Church features a style common to other Christian basilicas, including a dominant and free-standing bell tower. This church looks like it should be in Italy, instead of Zurich. When the church was originally built, it was outside the city walls, however, with the passage of time and urban development, the church is now centrally located in the City. The interior of the church shows the use of marble. There is a water fountain in the back of the church. Today, the Liebfrauenkirche serves as the main Roman Catholic church parish in the city. It is open from 8AM to 8PM; visitors are welcome.
Image by sidonius on Wikimedia under Creative Commons License.

The best way to become acquainted with a city’s energy and inner world is to witness the daily lives of its locals. Aussersihl, or Kreis 4, is a multinational neighborhood in Zürich, located near the center of the city. It was formed in the 18th century. There are many places to relax and plenty of entertainment to find here as well. The following is a list of places that are popular among...  view more