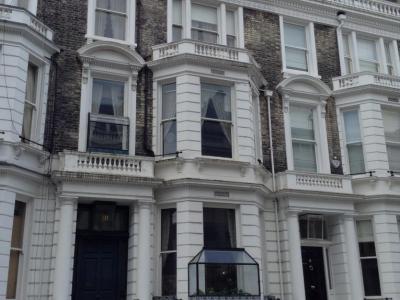 Linley Sambourne House at 18 Stafford Terrace was the home of the Punch illustrator Edward Linley Sambourne (1844–1910) in Kensington, London. The house, now Grade II listed, is currently open to the public as a museum.

Linley Sambourne House was an almost new townhouse when the Sambournes moved in, in 1875. It was Linley Sambourne who set about re-decorating the house in the Aesthetic style. Today the house is a fine example of middle-class Aestheticism; its influences can still be seen permeating throughout the house, from decorative Sunflower motifs in the stained glass windows to the fine selection of William Morris wallpapers that hang within the rooms through to the displayed collection of blue-and-white Chinese import porcelain.

Linley Sambourne died in 1910 but it wasn't until his wife Marion's death four years later that the house passed to their bachelor son Roy. Roy kept the house's interior largely unchanged until his own death in 1946. The house then passed to Roy's sister Maud Messel. Maud already had a large London residence therefore it remained mostly unoccupied and unchanged. In the years leading up to Maud's death in 1960, the house had become increasingly fascinating to her daughter Anne, Countess of Rosse. This fascination led to Anne proposing the foundation of the Victorian Society in 1957, and in turn the continued preservation of the house largely as it had been lived in by Linley.

Linley Sambourne House served as the set for the interiors of Mrs. Vyse's London home in the Merchant Ivory film A Room with a View. The house has featured in Arthur & George (2015) a three-part British television drama based on the book of the same name by Julian Barnes.

The Linley Sambourne House offers a fantastic insight into how the upper middle class Victorian lived and is well worth stopping by if you are visiting the Kensington area.
Image Courtesy of Wikimedia and Jhsteel.
Sight description based on Wikipedia.