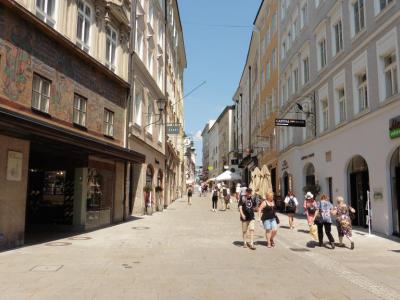 Linzergasse is a busy street in Salzburg flanked by medieval buildings. It is called Linzergasse because it was once the main road from Salzburg to Linz in Austria.

Linzergasse was an important road in Juvavum, the Roman city that later became Salzburg. In the Middle Ages, travelers and tradesman going to Linz passed through the Linzertor Gate that stood at the end of the street until 1894. The houses that flank Linzergasse date back to the 14th or 15th centuries and were always occupied by small craftsmen and their families.

There are many important buildings in Linzergasse. At No:1 is the St. Andrews Church that was built in 1898. No: 3 was the home of the scientist Paracelsus who lived here from 1540 to 1541. He was buried in the cemetery of the nearby St. Sebastian’s Church. House No: 7 was an old pharmacy where the poet George Trakl worked in 1887. House No: 9 is an old brewery and a scion of the family who owned it, Richard Mayr became a famous opera singer. One can climb the steps to the Kapuziner Abbey for breathtaking views. House No: 43 was a medieval bath house. The street ends with the St. Sebastian Church. The cemetery of the church also contains the graves of Mozart’s father Leopold and his wife Constanze.
Image by Andrew Bossi on Wikimedia under Creative Commons License.