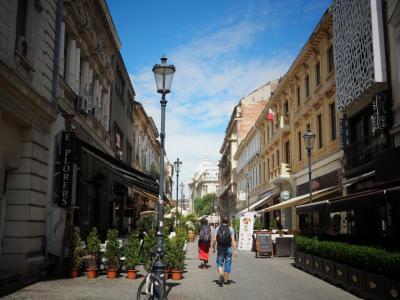 Lipscani is both a street and a district in Bucharest. Nowadays the backbone of the Old Town, from the Middle Ages until the early 19th century it had been a major commercial area.

Lipscani Street as such has been in existence since the early 18th century, albeit originally under a different name. It used to link the commercial heart of Bucharest to the Mogoșoaiei Bridge, and gained much prominence during the reign of prince Constantin Brâncoveanu (1688-1714).

Another prince, Serban Cantacuzino, built here an inn that stood until 1880 and was demolished to make way for the National Bank's headquarters. The Lime Inn, of 1833, still exists; you can see its construction year carved in stone above the entrance.

The eclectic-style buildings of the late 19th-early 20th century (combining elements of the Renaissance, Baroque, Rococo and Neoclassical) were all nationalized in 1948. In the 1980s, the Communist regime used them as free housing for Romani people, which subsequently brought them into an advanced state of disrepair. The area's continued degradation after 1990 caused the atmosphere of the past gradually disappear. The neighborhood was even scheduled for demolition at some point, which luckily never materialized.

During an extensive restoration, in the early 2010s, many historical buildings had been renovated and ruins of several medieval inns discovered under the pavement. Presently, much of the district is a pedestrian zone.

Apart from numerous restaurants and bars, among which is the famous Caru' cu Bere (Beer Wagon), and major international retail outlets, the area hosts a number of architectural gems, such as The National Bank of Romania, the Linden Tree Inn, and the spectacular bookstore Carturesti.
Image Courtesy of Flickr and Ștefan Jurcă.
Sight description based on Wikipedia.