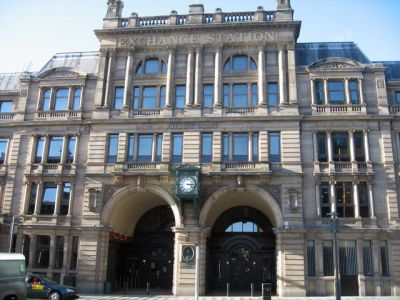 Liverpool Exchange railway station was a railway station located in the town centre. The station originally opened as the Tithebarn Street railway station on 13 May 1850. The station was extensively rebuilt and enlarged between 1886 and 1888, being renamed Liverpool Exchange on 2 July 1888. Under four extremely long roofs lay ten platforms, providing long distance services. Liverpool Exchange closed on 30 April 1977. Within a few years of closure the old station was demolished by Oldham Bros. However, the frontage of the station building was preserved and incorporated into a new office building built behind, called Mercury Court. The station site is still largely intact. The approaches to the station still exist on the old brick viaducts. The lines then descend and disappear just before Leeds Street. Parts of the original station wall can still be seen when walking down Pall Mall or Bixteth Street. The rest of the station site behind Mercury Court is currently being used as a car park.
Image by Sue Adair on Wikimedia under Creative Commons License.
Sight description based on wikipedia