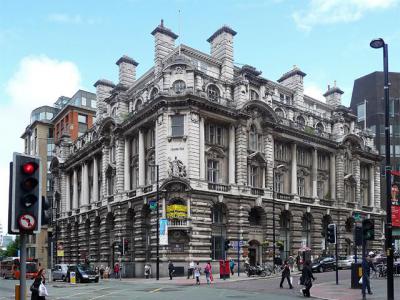 53 King Street is an Edwardian Baroque bank on King Street. Designed by architect Charles Heathcote, it opened in 1913 and was granted Grade II listed building status in 1974. The building stands on the site of the old Manchester Town Hall. The bank, designed in an elaborate Baroque style, is built on an L-shaped site with seven bays on King Street and eight bays facing Cross Street and between them a chamfered corner. It is constructed of Portland stone on a granite plinth and has a basement with four storeys above and double attics.
Image by Stephen Richards / CC BY-SA 2.0 on Wikimedia under Creative Commons License.
Sight description based on wikipedia