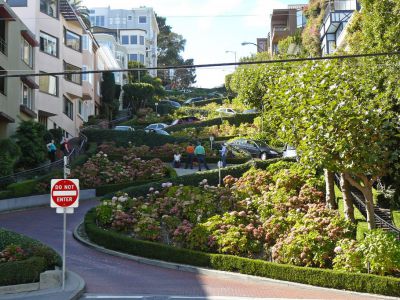 As a tourist magnet, Lombard Street is recognized as the most crooked street in the world. It takes eight turns on a 24-degree slope to make one feel that it is also, indeed, one of the steepest.

Even though walking or cycling this one-way (downhill) street may instill a sense of immediate vertigo, which can be risky at times, the reason for Lombard's crooked form, surprisingly, is safety. Given the natural grading of the land, the zig-zag pattern reduces the effect of the slope's steepness, making it easier to play on. As far back as 1920, it was suggested that scenic switchbacks to be added to bring a certain appeal to the surroundings, and apparently, it worked.

Year after year, Lombard Street manages to get more than its share of visitors who marvel at its scenic beauty and strangeness. Although zig-zag patterns may be enough to visit, a lesser-known fact about this street is that it houses some of San Francisco's most magnificent mansions. One of them – the Montandon House – is also reputed for being haunted.

For many, if not all, guests of San Francisco, a visit to Lombard Street is a must, if only to check it off their bucket list!

Tip:
Around 10 am is the best time to visit due to less crowd and sunshine. It is nice to start at the top and look down, then walk down and look up. Not only is it a lot easier, but if you carry on down the road, it will lead you to Coit Tower, another attraction in its own right, offering panoramic views over the city and the bay.
Image Courtesy of Wikimedia and SPBer.