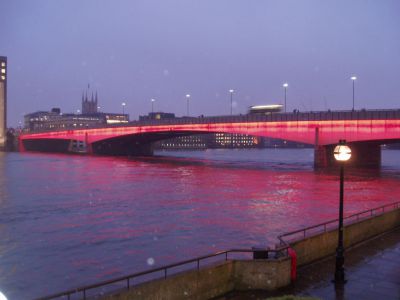 We all know the children’s nursery rhyme “London Bridge is Falling Down”. Today’s London Bridge is not falling down, but its predecessors were all destroyed during wars or by fires.

The first bridge to span the Thames at this spot was a Roman pontoon bridge built in 50 AD, replaced in 55 AD by a piled bridge, which was destroyed in 60 AD by Queen Boudicca. The bridge was rebuilt but fell into disrepair when the Romans left. It was rebuilt in 990 and again destroyed – this time by Prince Olaf in 1014.

The Norman Bridge built in 1067 was destroyed in the London Tornado of 1091. King William II had it rebuilt but this time it was ravaged by fire in 1136. The stone bridge built in 1173 had a chapel dedicated to Thomas Becket in the centre and houses and shops were built along the bridge, making the passage for carts and wagons very narrow. Fire destroyed the North end in 1212 and the South end in 1633. The South gateway was used for over 300 years as a place where traitor’s heads were put up on pikes for the edification of the general public.

In 1756 the houses were removed from the bridge and a new bridge was built in 1831. This bridge was sold in 1968 to an American millionaire and transported piece by piece to be reassembled at Lake Havasu in Arizona. The current bridge was opened by Queen Elizabeth II in 1973.

Don’t miss the London Bridge Experience and London Tombs – the scariest attractions in the capital. You will find them in the Gothic vaults under the bridge. In the London Bridge Experience you will be led by actors through the history of the bridge. London Tombs takes place in an ancient plague pit and is very frightening. Children of under 11 aren’t allowed in.
Image by burge5000 on Wikimedia under Creative Commons License.
Sight description based on wikipedia