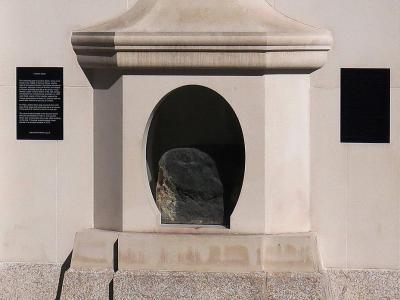 The mysterious London Stone until recently was ensconced at 111 Cannon Street. It is a large block of limestone thought to have been brought from Bath in Roman times.

John Stow, an early London historian, mentions the stone in his Survey of London in 1598. He claimed a list of properties containing the location of the stone was given by King Aethelstan to Canterbury Cathedral in the tenth century.

London Stone was a famous landmark in 1450 when Jack Cade led his rebellion against Henry VI. Cade struck the stone with his sword and declared himself "Lord of this City." Smacking the stone was easier than smacking the King. Cade's rebellion and Cade himself were swiftly quashed.

There are myths. It has been called a "Druidic" marker for some ancient rites or a Roman milestone. William Blake wrote, "In offerings of Human life...They groan'd aloud on London Stone..." Another myth claims medieval kings would smite the stone to announce their control. This did not work well for Jack Cade and the kings made no comment.