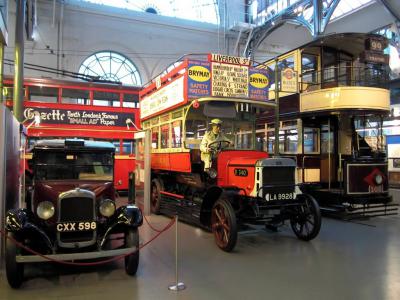 The London Transport Museum, based in Covent Garden, London, seeks to conserve and explain the transport heritage of Britain's capital city. The majority of the museum's exhibits originated in the collection of London Transport. The museum operates from two sites within London. The main site in Covent Garden is open to the public every day.

The museum has on display many examples of buses, trams, trolleybuses and rail vehicles from 19th and 20th centuries as well as artefacts and exhibits related to the operation and marketing of passenger services and the impact that the developing transport network has had on the city and its population. The first underground electric train, from 1890, can be seen here

The entrance to the museum is from the Covent Garden Piazza, amongst the Piazza's many tourist attractions. Museum operates from Monday to Sunday: 10 am – 6 pm (last admission 5:15 pm). Please note that children under 12 must be accompanied by an adult.
Image by David Stanley on Flickr under Creative Commons License.
Sight description based on wikipedia