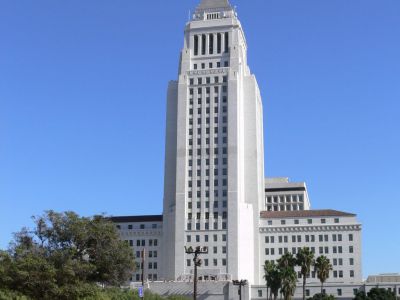 A lot of tourists visit the Los Angeles City Hall, not to see the mayor, but to visit the observation point on the 27th floor, which will give you a wonderful view out over the city – and even Catalina Island on a clear day.

The building, which stands on North Spring Street, was built in 1928 to designs by Parkinson, Austin and Martin. Its Art Deco/Art Modern façade is 138m high and has 32 storeys. Apart from the mayor’s office, it also houses the Los Angeles City Council Chambers and offices.

The tower is built of concrete symbolically made from sand taken from each of California’s 58 counties and mixed with water from the state’s 21 Spanish missions, which spread the Christian faith among the Native Americans between 1769 and 1823. The topmost part of the tower was inspired by the description of the Mausoleum of Mausolus in Halicarnassus.

In 1994, after the Northridge earthquake, the curtain wall terracotta and granite façade was restored. Between 1998 and 2001, the building was given a seismic retrofit and 526 base isolators were fitted, making it the tallest base isolated structure in the world, capable of withstanding an earthquake of up to 8 on the Richter scale.
Image Courtesy of Wikimedia and Andreas Praefcke.