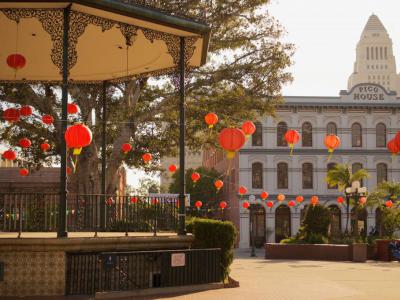 Los Angeles Plaza is the central point of the Los Angeles Plaza Historic District and the birthplace of the city. Felipe de Neve, the Spanish Governor of the Californias who selected the site and laid out the town of Pueblo de Los Ángeles, wanted the plaza to be the geographical center for his newly founded town.

De Neve's plaza, as was originally known, was rectangular in form — 75 yard wide by 100 in length. Built in the 1820s, the plaza was the city's commercial and social center. It remains the site of many festivals and celebrations. The plaza has large statues of three important figures in the city's history: King Carlos III of Spain, the monarch who ordered the founding of the Pueblo de Los Ángeles in 1780; Felipe de Neve, the Spanish Governor of the Californias who selected the site of the Pueblo and laid out the town; and Junípero Serra, founder and first head of the Alta California missions.

In addition to this, the plaza is dedicated to commemorating the original forty-four settlers (Los Pobladores), and the four soldiers who accompanied them. A large plaque listing their names was erected in the plaza, and later plaques dedicated to the eleven individual families were placed in the ground encircling the gazebo in the center of the plaza.

The plaza has a family friendly atmosphere with a perpetual buzz about it. There’s color, culture, entertainment, and food. There’s always something happening here – to watch, to listen, to savour.
Image Courtesy of Wikimedia and Levi Clancy.