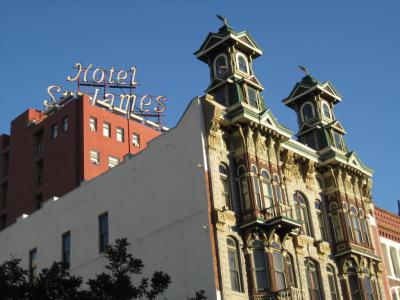 Builders of the Hotel del Coronado and of the Keating Building, the Reid brothers can also take credit for this Baroque Revival treasure: a stately, four-story twin-towered Victorian structure nicknamed the "Queen of the Gaslamp". Constructed in 1888, it was the city's first granite building, but what sets it apart is rather the ornate nature of the trim work. Of special note are the ornate bay windows that project from the façade – you won't see many better examples than this!

Having started out as the official headquarters of the Louis Bank of Commerce, the building was used for banking purposes until 1893, when famous entrepreneur Isidor Louis opened an oyster bar that used to be frequented by such famed people as Wyatt Earp. In fact, there has been some speculation as to how involved Wyatt may have been in the local operation of a particular business inside the location. The upper floors were turned into what used to be known as the Golden Poppy Hotel – a famous house of ill repute that was ran by fortune teller and psychic Madame Cora. Part of what made it so famous was that the girls would wear dresses that matched the color of the room they used to service their clients.
Image Courtesy of Flickr and Jerome Strauss.