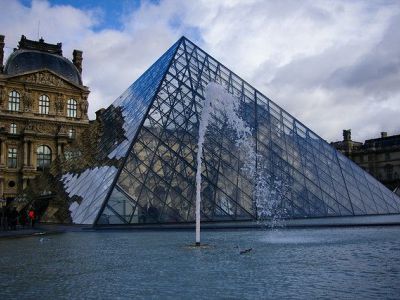 The iconic glass pyramid entrance to the Louvre is a testament to the lasting fascination of the French with ancient Egypt, and perhaps the first thing associated with the Louvre in the eyes of the numerous tourists visiting Paris these days.

Initially considered a bit too futuristic and arousing concerns over its expedience and extravagance (as being too big or too glassy), this pyramid nonetheless has played well the role of a “beacon” for visitors, just as intended. Amid the debate as to whether the Louvre's great size demanded multiple smaller entrances, instead of just one big, to ensure getting in and out quicker, the idea of the Grand Louvre pyramid being more than just a gate but a statement of the national power and greatness had prevailed.

Whether a fan of the pyramid or not, you can't help appreciating its sheer engineering splendor, simultaneously projecting the image of both solidness and immateriality. Just like the one of Giza, the pyramid of Louvre has the golden mean proportions. It is made of the specially laminated glass which has no distinct greenish tinge present in the commercially available glass and thus ensures minimum color distortion when looking through it at the Louvre’s facade. Wednesdays and Fridays, as well as on the first Saturday of the month, the museum stays open through the night and the pyramid goes ablaze when all the lights are on. It is then that the idea of the pyramid giving the Louvre a very special touch becomes most sparkling.

To mark the pyramid's 30th anniversary in 2019, Californian artist JR created a collaborative piece of art generating a giant optical illusion in which the pyramid would disappear underground. Luckily, that was just an entertainment stunt, and the real pyramid is still in place. However, if you wish to double check, just visit the Louvre whenever you're in Paris, and see for yourself!