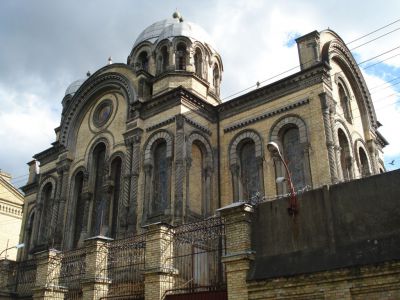 Lukiškės Prison is a prison in the center of Vilnius. After more than a century of continuous service, the prison suffers from overcrowding and is in need of investment in thorough improvements. The prison is located in a prestigious area, next to the Seimas Palace.

The prison was built in 1904, when Lithuania was part of the Russian Empire. At the time it was one of the most technologically-advanced prisons in the empire. It had central heating and water supply, modern plumbing and ventilation. The complex also includes Saint Nicholas Orthodox Church.

The prison became more notorious during the Nazi occupation of Lithuania, when it was used by the Gestapo and Lithuanian Saugumas as a holding cell for thousands of Jews from the Vilna Ghetto and Poles, picked up in Łapankas in reprisals for actions by the Polish resistance.
Image by Alma Pater on Wikimedia under Creative Commons License.
Sight description based on wikipedia