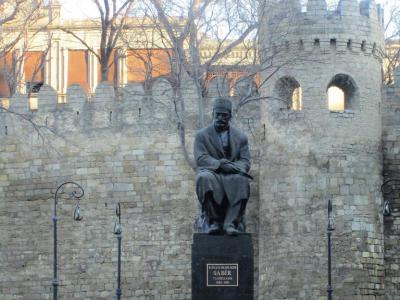 This monument is dedicated to Sabir, which was the pen name of Alakbar Tahirzadeh (1862-1911), a very distinguished Azerbaijani poet, satirist, public figure and professor. Sabir, who began writing at the age of eight, is considered to have single-handedly invented Azerbaijani satire. The monument is located next to Ismayliya Palace. Created in 1958, it is made of bronze, black granite and marble. Sculptor Garyagdy’s imposing work stands nine metres tall.
Image Courtesy of Wikimedia and Samral.