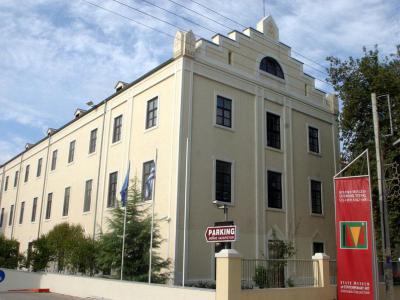 The Macedonian Museum of Contemporary Art Thessaloniki was founded in 1979 by a group of visionary citizens (Maro Lagia and Alexandros Iolas) of Thessaloniki.

The Board of Directors of the MMCA decided to honour Alexandros Iolas by giving his name to the Museum’s new three-storey wing and to dedicate to him the catalogue of the permanent collection, which now numbers more than one thousand works (paintings, sculptures, installations, assemblages, engravings, photographs), in the hope that the Museum will remain independent, unconventional and open-minded, that is guided by the same principles that charactirised Iolas himself.

At present the MMCA's permanent collection comprises 2000 works by Greek and foreign artists, it is constantly being augmented by gifts from collectors, artists, gallery owners, and private individuals and constantly presented in the museum' s new wing.

Apart from the permanent display, the MMCA has mounted over 100 exhibitions of works by Greek and foreign artists.
Image by NikeNik79 on Wikimedia under Creative Commons License.
Sight description based on wikipedia