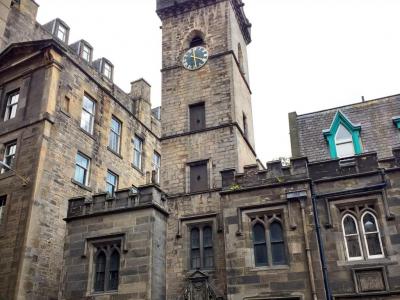 The Magdalen Chapel (or Magdalene Chapel) was built between 1541 and 1544 using money bequeathed by Michael MacQueen (died 1537), supplemented by his widow, Janet Rynd (or Rhynd). The Foundation Charter of 1547 reads: 'when the said Michael was greatly troubled with an heavy Disease, and oppressed with Age, yet mindful of Eternal Life, he esteemed it ane good Way to obtain Eternal Life, to erect some Christian Work, for ever to remain and endure.' It was designed to accommodate a chaplain and act as an almshouse for seven poor men who were to pray for the soul of Mary, Queen of Scots. Prior to the Reformation, the Queen Regent, Mary of Guise arranged academic lectures there.

An inscription over the door reads 'He that hath pity upon the poore lendeth unto the Lord and the Lord will recompence him that which he hath given, Pro. XIX vers XVII.'

A semi-circular wooden platform was installed at the east end around 1615 and the layout of the Chapel was altered. The carved armorial panel over the door was created by John Sawer in the same year, and was moved to its current location in 1649. The tower and spire were added about 1620. A bell, by the Dutch bell founder Michael Burgerhuys of Middelburg, dates from 1632. The stained glass in the middle window of the south wall features the Royal Arms of Scotland and the Arms of Mary of Guise. It is the only intact pre-Reformation stained glass window in Scotland.

The Magdalen Chapel is designated as a Category A listed building.
Image by Nicholas Mutton on Wikimedia under Creative Commons License.
Sight description based on wikipedia