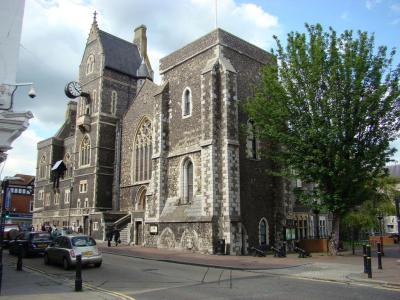 The Maison Dieu (House of God in French) is an impressive medieval building founded in 1203. It was originally a rest stop and hospital for pilgrims making their way to the shrine of Thomas Becket in Canterbury. It also accommodated wounded and impoverished soldiers.

A chapel and the magnificent space known as Stone Hall were new additions during the 13th century. Stone Hall features a towering ceiling and stunning stained glass windows. Lining the walls of this grand old hall are portraits of dignitaries from Dover's past. There are also flags of the Cinque Ports, the five major ports of southeastern England.

Extensive restorations took place during the 19th century, and a Council Chamber was added to the end of Stone Hall. The addition of the Mayor's Parlour took place in the 1880s. It was a place for the mayor of Dover to hold meetings. Connaught Hall was also built at this time, a grand assembly room used for concerts, dances, and other public events.

In the 1830s, Maison Dieu was incorporated into the town hall. Dover Town Hall currently serves as a function hall, offering a historical setting for meetings, performances, special events, and weddings. Several of the building's beautiful rooms are available for hire by the public.
Image Courtesy of Wikimedia and Hajotthu.